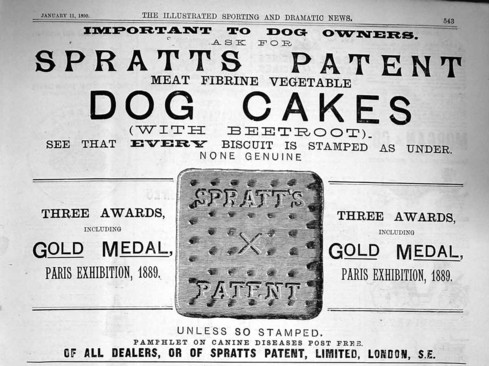 When did commercial dog food come to be? When did the family pooches get the upgrade from bones and potato peelings to delicious canned horse meat? This question arose when I wanted a character to bring up* dog food in “From the Earth to the Zoo.” But I came to wonder if dog food even existed in the mid-1930s, when the story is set.

Most of what I learned comes from this article at Neatorama, which is a reprint of a 1988 article in Uncle John’s Unstoppable Bathroom Reader. I challenge you to find a more reputable source.

The short answer is: Yes. Dog biscuits came first, in 1860. According to the story, an electrician named James Spratt saw some dogs in the port of London greedily munching up old ship’s biscuit, a mixture of flour, water and salt that was a staple for sailors during their long sea voyages. Ship’s biscuit was also called hard tack, which tells you just how appetizing it is. Spratt added vegetables and beef blood to the recipe, and thus the first dog food was healthier and probably more appetizing than what the poor sailors had to choke down.

Canned dog food came in 1922 in the form of Ken-L-Ration, and was primarily horse meat. The story of pet food’s growth in popularity is a story of advertising creating a need. In the 1960s, pet food industry lobbying groups (have you ever met a pet food lobbyist? Me neither.) cooked up a campaign to convince consumers that feeding dogs anything except commercial dog food was a bad idea. Their message: Table scraps kill.

*Bring up in conversation, not upchuck.